The Lake Effect, by Erin McCahan 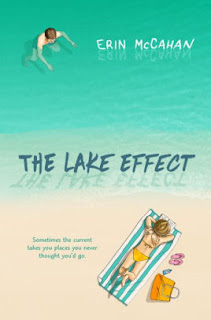 Briggs has what ought to be an easy summer job: helping an old lady take care of her beach house on Lake Michigan.  He’s good with old ladies – charming them the way he charms most women.  The summer is just a minor detour on his long-term career plans to go to college, law school, and make a lot of money.  Spending some time on the beach, taking care of an elderly woman, and perhaps meeting a local girl for some fun is just a chance to relax.

But he isn’t expecting stubborn and determined Mrs. Bozic. Nor the girl next door who is resistant to his charms.  And during a summer of home improvement, the quest for the perfect blue paint, funeral shopping with Mrs. B, and more than a few discussions about death, Briggs will learn a lot about life and plans.

At times charming and hilarious, I found myself ultimately defeated by the unevenness of the novel (the overuse of chapter breaks didn’t help much either!).  The story's strength is its characters.  Mrs. B was, of course, hilarious and a lovely foil to Briggs’s cavalier arrogance.  Girl next door Abigail seemed less valuable (this is not a story that really needs a romance and it did not get too far).  Briggs was the usual snarky crude boy with a heart of gold that YA writers love and girls will apparently tolerate.

I do wish we could move beyond the idea that boys’ books need to have fart jokes and petty humiliation to attract male readers.  It’s a tiresome cliché and ultimately promotes the idea that boys should be callous and rude to each other (if there is a more fundamental cause of rape culture, I don’t know it!).  And in this case, it is such a contrast to the decent things that Briggs does.
Posted by Paul at 9:26 AM