The Secret of Nightingale Wood, by Lucy Strange 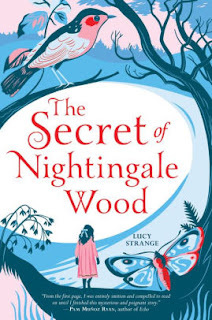 Since her older brother Robert died, Henrietta's mother has been depressed and secluded in her bedroom.  Dr. Hardy says she needs to be left alone and he gives her strong psychoactive drugs to control her hysteria.  Henry is convinced that the doctor's treatment is hurting Mom and she longs see her.  But with father away, the staff obey the doctor and mother's condition grows worse.

So, it falls on Henry to rescue her family from the doctor and his nefarious ambitions.  With the help of the neighbors, an old family lawyer, and a witch in the woods, Henry will do so.  And in the process uncover some historical mysteries along the way.  Set in the early 1920s, this story will appeal to fans of The Secret Garden, with its combination of adventure and personal development.

Either derivative or a tribute to that long tradition of young girls exploring scary woods and saving the day, there's not much new here, but it's an enjoyable read.  I found the ending drawn out and full of far-too-neat wrap-ups, but the story itself contained suspense and a brave girl to root for.


[Disclaimer:  I received a free copy of the book in exchange for an honest review.  When I am finished, I will donate the book to my local public library]
Posted by Paul at 11:48 AM