Turtles All the Way Down, by John Green 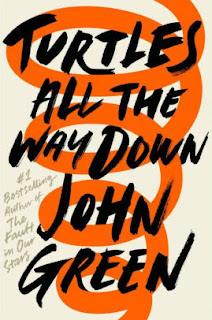 When Aza and her best friend Daisy hear about a reward for locating the missing billionaire Russell Picket, they decide to haul out their sleuthing skills.  Aza and Pickett's son Davis go way back but they haven't seen each other in years. The search for the Dad brings them back together and sparks a romance.  However, there is a complication:  Aza suffers from an obsessive form of hypochondria that manifests as an intense fear of infection.  The idea of kissing (with its exchange of fluids and germs) is a pretty formidable concept, let alone dating a guy. A number of subplots (pondering impending graduation, Daisy's exciting career in Star Wars fan fic, lost and deceased parents, and underground art) also play a role.

John Green can be very good, but when he misses, he misses big time.  I found this particular book to be aimless, aiming for deep meaning but mostly ending in navel gazing.  The title itself is a reference to a pretty meaningless analogy about the meaning of life.  The whole book is like that.  And the characters are pretty flat.  Daisy and Aza have some interesting sparks and their friendship is the best part of the book, but nothing really develops from their arguments.  The romances just peter out (let's say that Green's strength is not in the romantic literature department).  And the key strength of a Green novel -- humor -- is strangely absent in this largely earnest novel.