The Library of Fates, by Aditi Khorana 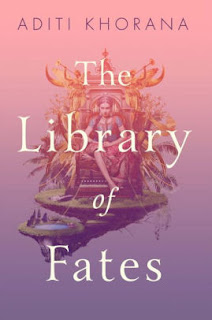 In an attempt to buy peace and forestall Emperor Sikander’s ambition to conquer Princess Amrita’s kingdom, her father has promised her to the Emperor.  The thought horrifies her but is ultimately moot as the Emperor launches a surprise siege.  Her family and friends slain or imprisoned, Amrita flees for her life with the companionship of an oracle, a young woman named Thala.

Together, they seek the fabled Library of Fates, where every human has a book that tells their story.  If they can find the Library and convince the gatekeeper to admit them, they plan to rewrite their stories and undo this tragedy.  However, along the way they discover that the situation is much more complex and Princess Amrita is forced to make a huge sacrifice.

While ostensibly a pretty routine fantasy novel, two things stood out that are worthy of mention.  First of all is the wonderful South Asian flavor of the story.  So many fantasy novels are bound on an implicitly Western European motif.  But here, the clothes, foods, titles, and even the mannerisms are Indian.  The bad guys are even called “Macedonians.”

Which brings me to my second point.  While the novel is almost as bloody as any other sword and sorcery fare, Amrita’s actions are notably not.  She never actually kills anyone (or anything) although she considers it on several occasions.  Instead, she uses reason to work through her conflicts and chooses to employ non-violent alternatives.  The story rewards her each time by showing how a non-violent solution actually solved more problems in the end (while the bad guys suffer in the long run for resorting to the sword).  As Khorana puts it in a blistering condemnation of the current US president in her introduction, “[W]hen we act with only our selfish interests in mind, disregarding the rights and experiences of others, everyone loses.” Wisdom for our times.