You Bring the Distant Near, by Mitali Perkins 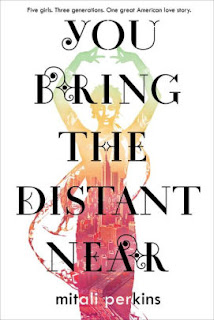 A story of three generations of the Das family, Bengalis who immigrated to the United States in the 1960s.  Covering over forty years of family history, it centers on the Das women:  Ranee the matriarch, her daughters (academically gifted Sonia and her thespian sister Tara) and their daughters Anna and Chantal.  A mixed-race family, each woman struggles with their sense of identity and what it means for them to be Bengali and American.

While the story occasionally drags, the novel is full of vivid characters that make this a delightful read.  The expansive timeline of the story allows us to see everyone grow up and develop.  And despite its race through the decades, it's surprisingly fluid, avoiding any great problem with its temporal jumps.  A great deal of tear-jerking is milked from death and perhaps a bit too much drama from surprise out-of-character changes, but this is a warm story that celebrates humanity and diversity in a non-preachy way.