You Don't Know Me But I Know You, by Rebecca Barrow 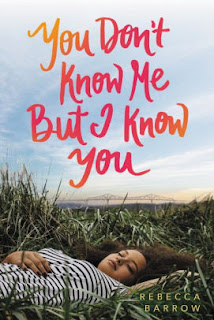 A basic story with just enough drama to let dialogue and development bloom. The plot, simple enough, is about what Audrey does when she discovers she is pregnant.  There's plenty of internal dialogue, external conversation (with boyfriend, with mother, with friends).  What there isn't is a lot of action.  It's a story about friendships and people discussing those bonds.  And it's a story that is calculated to allow as much opportunity for tears and laughter as it can.

In sum, this is a book about talking.  It hardly matters where these characters are or what they are supposed to be doing:  They like to talk (and occasionally rage).

Barrow's strength is obviously dialogue and all of the internal motivators that drive an authentic conversation.  Unfortunately, there's not a lot of variety in the voices.  Everyone pretty much sounds the same (a type of intellectual suburban lingo and manners that is devoid of time or place or gender).  So, while everyone was well-spoken, I found it hard to differentiate characters or to visualize them.  Characters occasionally drift into selfish and irrational behavior but in the end everyone makes up and plays nice.  That makes for a comfortable read, but not one in which you feel much investment.  Despite all the heart strings pulled, I didn't feel the emotional pull I expected from such a sensitive topic as teen pregnancy or the choice between adoption and abortion.
Posted by Paul at 10:10 AM