A Little Something Different, by Sandy Hall 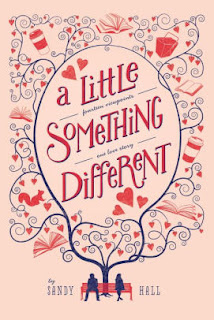 Lea and Gabe are in love with each other and everyone knows it, except them.  So, why not let the rest of the world write their love story for them?

This is the basic premise of Sandy Hall's original and quirky NA story:  a love story between two college students told from the perspective for fourteen different narrators.  Obvious suspects like friends, roommates, and siblings are joined by less obvious voices (teacher, teacher's spouse, bus driver, waitress) and even a few silly ones (the park bench and a friendly neighborhood squirrel).

With so many different points of view, it does become a bit mushy telling the story.  Success relies on each point of view having its own special offering.  And here, I think Hall has overdone it.  The voices are very similar so their distinctiveness relies entirely upon offering a unique viewpoint.  The squirrel and the park bench serve this role quite well (I'm partial to squirrels, so I may be biased), but some of the others blur together.  For example, the bus driver and the waitress are largely the same character and Lea's roommate and Gabe's brother serve basically the same role in the story.  The many perspectives sometimes become redundant and the story loses speed.  There is also the small issue that an obvious romance can only be milked out so long before you just want to shove these people in front of each other (as, in fact, their friends try to do).
Posted by Paul at 11:43 AM