A Map for Wrecked Girls, by Jessica Taylor 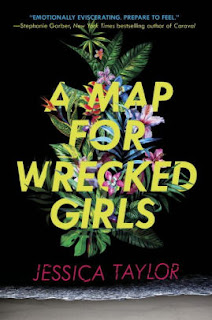 Ever since Emma betrayed her sister Henri, the two have barely talked to each other.  But when a freak boating accident leaves them stranded on a dessert island, things change (although not for the better).  Along with them is Alex, a boy with a tortured past, that Emma falls in love with.  Meanwhile, Henri drifts away becoming more and more anti-social and distant.  And throughout, the three young people struggle for survival in a very hostile environment.

While the point of the story is supposed to be the loss and reconciliation between two sisters, I found that portion of the story tedious and strained.  The resolution was particularly unsatisfactory, relying on an implausible explanation and a far too easy solution.  The survival tale proved more thought out and mildly suspenseful.  And the juxtaposition of the two very separate stories was ultimately awkward.  It was a hard slog to get through.
Posted by Paul at 2:32 PM