A Psalm for Lost Girls, by Katie Bayerl 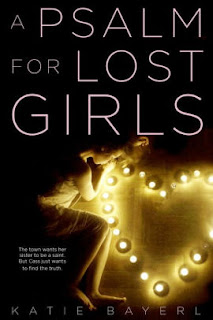 While she was still alive, people said that Callie's sister Tess was a saint (of the type that performs miracles).  That she might not have lived the life of one was neatly overlooked by the needy town and their overzealous mother.  And when Tess dies young, the fervor to have her beatified grows out of control.

Everyone seems to have an agenda except for Callie, who simply wants her sister to regain the life that others stole from her to make her something she wasn't.  But is Callie really son altruistic?  Does she really have a sober vision of Tess or has she simply found a way to beatified her in her own way?  As the community suffers from a seemingly unrelated child abduction (and then "miraculous" reappearance), questions about Tess's sanctity and Callie's inability to let go come to a head.

The very interesting premise of this novel -- the fine line between grief and honoring the dead -- gets muddied by so many other things in this literary debut.  The story I most wanted to read (the tension between mother and living daughter) is there but clouded and eventually overrun by the psychopath child abductor subplot.  And the similarly interesting story of the two sisters, compounded by their attraction to the same boy, just drops off the radar.  Added to the mix are elements about church conspiracy, a struggling New England community, and a complicit media that make for interesting swirl but largely distract from the meat of the story.  There are so many wonderful ways this story could have gone, but instead it just limps to its meager conclusion amidst unrealized ambitions.
Posted by Paul at 3:52 PM