The Impossible Vastness of Us, by Samantha Young 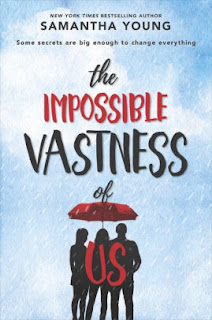 India Maxwell, a childhood abuse survivor, has plenty of issues with trust.  She’s learned to survive by being tough and being on top of her school's social hierarchy.  But when her mother announces that she’s remarrying and that they are moving across the country, it throws off everything India’s worked for.  And it triggers more than a few of her fears.

When they arrive, India finds that the situation is even worse than she feared.  Her stepfather-to-be is immensely wealthy and his stepdaughter and her friends, while India’s age, couldn’t be more different.  Initially hostile to her, India has to struggle to settle in to her new environment.  And as she does so, she finds that not everyone is who they seem and that the secrets that they hold could destroy each other and take India down with them.


Mostly non-remarkable romance material, Young focuses on the relationship between India and her stepsister Eloise.  This proves a good choice as Young knows well how to write the complexities of adolescent friendships.  The romance (a love triangle between the two girls and a boy named Finn) is less inspiring (at least its boy-girl parts) and serves as a better foil between the two girls.  So, read it for the girl-bonding sweetness and ignore the rest.

What should go down as the most perfunctory sex scene in Teen Harlequin history graces this novel on page (page 320 – blink and you’ll miss it!).
Posted by Paul at 3:33 PM