I Never, by Laura Hopper 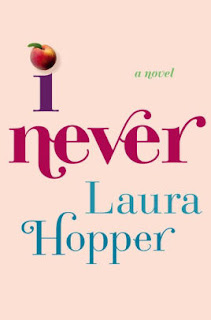 Judy Blume's classic Forever gets an update with Janey and Luke.  Janey is dealing with her parents separating and gets swept off her feet by the sexy, kind, and understanding Luke.  She's awkward, naive, and completely inexperienced, but Luke is the perfect first boyfriend and first lover.  In painstaking detail, Hopper draws out the day by day progression of their relationship delving into several pretty explicit sex scenes in the end.  Unlike Forever, which focused on the heroine's fretting over whether to lose her virginity (and then regretting it), Janey has an overall more positive experience and learns to embrace her sexuality.

It's a very intimate portrayal of adolescent romance and sexuality that reads like a diary and follows all the rules of YA relationships (from the entirely too-perfect boyfriend to the gossipy BFFs that Janey shares everything from petty jealousy to sex secrets with).  That said, it shares the fundamental flaw of Judy Blume books:  it's a far too perfect portrayal of the world and the book has a mission to sell a philosophy rather than actually tell a story.

As a novel that will encourage young women to relax and enjoy sex for its positive elements, it's a pretty successful and readable novel.  As a story about real people in real relationships, it's about as far away as it could possibly be.  Janey is astute and extremely well-spoken and has a voice that alternates wildly between the immaturity of a pre-teen and the wise thoughtfulness of a middle aged woman.  What she doesn't do, however, is sound like a seventeen year-old.  And Luke?  Well, he's just a fantasy creation (endlessly patient and kind, always saying the right thing, never has any interest beyond making Janey happy, etc.).  I liked the Janey's mother most of all, but I assume that was basically Hopper's voice, and I didn't buy the calm reasoned discussions between mother and daughter about sex and longing.

And yes, the sex scenes are a little too numerous and a little too explicit.  But if that's what you are looking for, I can give you some much better recommendations!
Posted by Paul at 8:14 PM