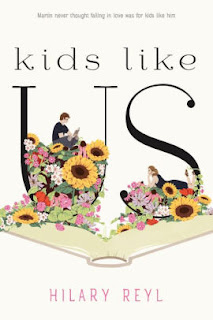 Autism has enjoyed a bit of trendiness in young adult literature in the past five years or so, but this latest contribution stands out for two reasons -- its unusual setting and the strength of Reyl's depiction of the experience of autism.

Martin, largely educated in a special school, gets to experience a summer in a mainstream school.  Not only is it a "general-ed" school, but it is in a foreign country.  Being overseas actually proves to be a mitigating factor for Martin's assimilation -- he finds it easier to relate to others through translation.

Martin's mother is a movie director and she is spending the summer in Provence working on a film.  She brings Martin along with her and, to help him pass the time, suggests that he try attending the local lycée.  He does so and has mixed success making friends and fitting in.  When he discovers that the kids he thinks are his friends are actually only being nice to him because they want Martin to get them access to his mother's movie, he is heartbroken.  However, he makes an unexpected decision that surprises everyone.

As I noted from the onset, what makes this story is the insightful portrayal of Martin.  While we get a pretty good idea of how Martin presents himself externally, we also get far more about what is going on in Martin's head.  Admittedly, his thought prcess is described in a way that Martin's character could not realistically do (i.e., through the words of a non-autistic author) but it is done with great sensitivity.  At times, Reyl goes overboard in bringing up jargon and catchphrases from therapy, or in over intellectualizing behavior, but the detail is really helpful in following along with what might otherwise be hard to follow.  Moreover, it gives the reader an unusually detailed understanding of autism making Martin much more sympathetic.
Posted by Paul at 11:14 AM