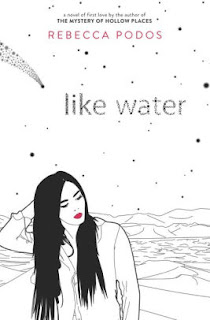 Out in rural New Mexico there isn't much to keep a kid in town after they graduate.  Vanni certainly never meant to stay.  But after her father gets sick with Huntington's Disease, someone has to stay home and take care of the family restaurant.  Crushed by the lack of future in her life (and fears that she too will get sick some day), she's drifting aimlessly when she meets Leigh.

Leigh is just angry (and potentially unstable). Frustrated that she's been moved out here (from Boston) and desperate to get back to the East Coast, she unexpectedly latches on to Vanni and the two girls find that they share an interest in each other.  Vanni's never considered the idea that she was gay, while Leigh seems to have entirely different issues going on.  In the end, they manage to solve their problems by realizing that leaving is not necessarily a cure for their woes.

While not a plot that particularly reeks of originality, I really liked the characters and the setting.  Vanni and Leigh are assertive young women who are entirely unapologetic about the space they use up.  They don't do angst (except perhaps towards each other) and I enjoyed the complexity of the relationship between them.  The setting was unusual (not too many novels get placed in the southwest) and colorful.  Podos does an excellent job of creating bilingual characters while foregoing constant translation.  And by doing so without calling extra attention to it, I felt much more immersed than a token Spanish word here or then would have achieved.