Now Is Everything, by Amy Giles 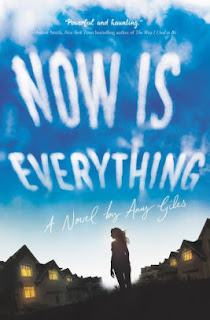 Hadley lives in the perfect house with perfect parents, but behind closed doors, her family is riven by her abusive father's calculated destruction of Hadley and now her little sister Lila.  Torn between her need to escape and the desire to protect her little sister, Hadley plays the peacemaker, trying to manipulate the situation to keep her father's explosive temper under control.  That strategy fails her when she starts dating Charlie, in a relationship that her parents explicitly forbid.

Harrowing reading with a very unsavory set of parents.  Hadley is an opinionated character and strong in a way.  She has a single-minded determination to work through problems her own way, but an arrogance about her capabilities (probably nurtured inadvertently by her father) that ultimately proves tragic and provides the novel a good deal of its mileage.

It is extremely ironic that the author in an afterword speaks strongly in praise of getting outside help, since this is the one thing that Hadley's character repeatedly refuses to do.  And while Giles is willing to cut her character some slack, I actually want to take the author to task for the decision.  Because it is pretty obvious what the correct and strong decision would be and it is strikingly against character for Hadley to be so stubborn throughout the novel.  The only purpose that such stubbornness really ends up serving is to drag out the story.  I have a hard time accepting that the behavior is plausible and, to those of you who argue that it is, then an even harder time seeing Hadley as any sort of heroine.  In sum, child endangerment as entertainment always strikes me as a bit sick, especially in this case where the solution is a deus ex machina conclusion, reinforcing the passive an oddly ineffectual actions of the main character.
Posted by Paul at 4:46 PM