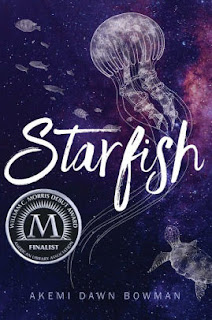 Kiko struggles with low self-esteem.  She dreams of attending art school in New York City.  When she is rejected by the school, she fears she'll remain stuck in her Nebraskan town, under the thumb of her narcissistic and emotionally abusive mother.  That fate starts to change when she reconnects with an old flame and decides to explore schools in California.  Free from her toxic environment at home, she spreads her wings and discovers her own potential and a sense of self-worth.

The novel is burdened by a number of YA cliches and a heroine who partially struggles from self-inflicted woes (I grow tired of characters who know that they are the cause of all the world's woes, since every reader can guess that the character will be proved wrong and their problems will then magically disappear!).  But there is a lot more to love in this debut novel than hate.  The toxic relationship between Kiko and her mother is as authentic as it is heartbreaking.  As depicted, it captures so insightfully the dependency of mother and daughter and how the child is so unable to break free.  I wondered at times where Kiko found her strength to break the cycle, but I was inspired by it.  I also loved the subjects of each of her drawings (a literary device used to close almost every chapter).

Now, if someone could please explain why the cover features a jellyfish?
Posted by Paul at 8:11 PM