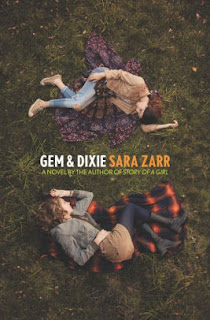 While Gem hasn't been able to rely on her parents, she has been able to count on her little sister Dixie.  In public, Dixie can be standoffish and independent (and she certainly is less socially awkward than Gem), but in the end they are the only two people who know what their lives are really like  With their father gone and Mom struggling with addictions, each other is sometimes the only thing they have.

Then Dad makes a surprise reappearance and instantly wins over the more trusting Dixie, much to Gem's chagrin.  But when the sisters make a surprise discovery of a huge sum of money that Dad has hidden, they decide to run away with it.  That run changes their lives and brings them closer together.  But, at the same time, it breaks the bond they have held and causes their paths to diverge.

When Zarr wants to really hit something out of the park, she knows how to do it.  And, as in my other fave of hers (Sweethearts), she shows an amazing talent for subtle, yet powerful writing.  No melodrama, just authentic intense emotions.  The money gave me feelings of dread throughout that often hung over the story, but when I put that aside, there was so much interesting stuff going on between Gem and Dixie.  And while this is Gem's story, we really do manage to get inside of both girls' heads and understand their complex relationship.  The ending is a bit accelerated to give us a sense of closure, but the bulk of the story (the transformation of Gem and Dixie's relationship from childish sisterhood to maturity) is memorable and noteworthy.
Posted by Paul at 4:59 PM