Jaya and Rasa, by Sonia Patel 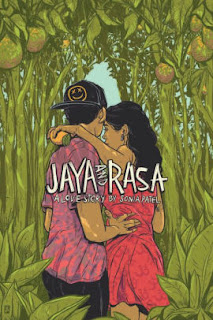 This book will probably win the award for the most unusual pair of characters.  Jaya's an Indian trans boy from a wealthy family.  His parents refuse to acknowledge his gender identity and, when they are not fighting with each other, try to hook him up with an eligible boy.  Rasa is the daughter of a neglectful mother who pimped her out at the age of twelve.  Since then, Rasa's been turning tricks to keep her younger siblings fed and alive.  All of this takes place in the idyllic environs of Oahu, adding just another exotic and original layer to this novel.

The romance that develops between these two young people is threatened from the start, both internally (from miscommunication) and externally (from Jaya's parents and Rasa's abusive pimp).  That provides plenty of drama, but the novel never really gels.  The story telling is functional but not very engrossing.  What makes the story compelling is the unusual characters, especially Rasa (Jaya's issues -- mostly peer and family -- are obviously more familiar territory).  But ultimately great characters are defeated by a clunky narrative.
Posted by Paul at 11:56 AM