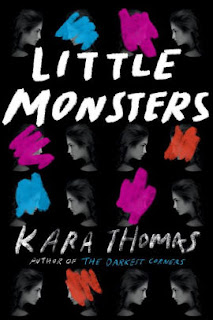 At first, Broken Falls WI seems like paradise to Kacey.  Leaving her neglectful mother in New York and resettling with her father's new family in rural Wisconsin, Kacey is struck with how accepting and friendly people are to her.  But when her friend Bailey goes missing (and is later presumed dead), suspicion turns on her as the new girl and Kacey discovers that her first impressions are misleading.

The writing is good.  While starting a bit slow, the story picks up pace and intensity with twists and turns that make the book hard to put down.  It's not much a character-driven story, although Thomas does make an effort to weave in the ways that Kacey's abandonment to her father's home feeds her appearance of guilt.  So, what appears a bit of a busy set of subplots are all woven together in the end.

One thing I did not like was the story's setting.  Placing this allegedly in Wisconsin raised my hackles. Thomas could have easily set all of this in Upstate New York (an area she presumably knows better) and it would have rung much more true.

You can ask if we really need another thriller about mean girls who murder each other, but there's certainly a market for them!  This particular one is above average.