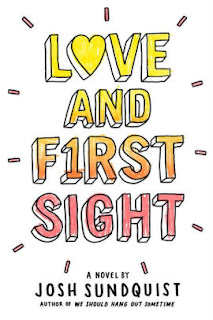 Blind from birth, Will learned at an early age that people couldn't always be trusted to tell him the truth.  For much of his life since then, he's stuck to being around other blind people.  But at sixteen, he decides he wants to try a mainstream schooling experience.  With a few mishaps along the way, he makes friends and even the initial sparks of a romance with a sighted girl named Cecily.

Along the same time, his doctor tells him about an experimental procedure that might be able to help him regain his sight.  But learning to see isn't exactly a straightforward process for someone with no prior sight.  Colors and shapes are strange to him.  Interpreting his surroundings, perceiving depth, and understanding perspective are all new.  But the greatest shock comes when he starts seeing what people actually look like!

A fascinating exploration of blindness and the differences between sighted people and folks without eyesight.  So many things that make perfect sense but which I had never given much thought to.  And this by itself, makes this novel a great read.  But there's also Sundquist's great writing, some strong and interesting characters, and a genuinely fun story.  The ending got rushed and is a let down, but this is still such a great book that I still recommend it.
Posted by Paul at 4:41 PM