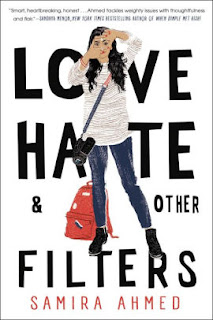 Maya Aziz dreams of studying film at NYU and making movies, but for her parents there can be only one future for her: pre-law or pre-med at a school nearby in her home state of Illinois.  And marriage, of course, to a nice Indian Muslim like herself.  They have even found the right boy for her, who in truth is actually a very sweet guy.

Honestly, there are times when all of this appeals to Maya. It would be so easy to just please her parents and follow the path they have chosen for her.  And when a domestic terrorist strikes close to home, staying close by makes some sense.  But it doesn't work for her:  not the boy or the school or giving in to her parents' suffocating fears.  But this isn't just about coming to terms with her parents, because when Muslims are considered suspect by a large number of America, how does Maya live her life in a way that is true to herself?

Exploring Indian-American Muslim identity both through the lens of reconciling modernism and tradition and with racism, Ahmed bites off a lot.  Her decision to include the politics and aftermath of an act of domestic terrorism sits uneasily on this novel in alternating chapters (the two threads never actually cross paths), but it helps to make the story more than the typical conflict of modern yearnings versus traditional elders.  Maya's a great character in the way that she stands up for herself and has a clear vision of how she wants to conduct her life, but there's not a lot of depth elsewhere.  That's alright as the latter half of the book is compelling stuff and I sped through it.
Posted by Paul at 12:36 PM