The Big Lie, by Julie Mayhew 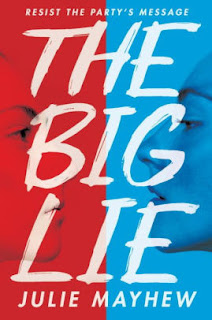 Speculative fiction that explores what life would be like for teenagers in modern-day Nazi England.  With a nod towards Handmaid's Tale, this novel traces Jessika's gradual descent from golden child, privileged Hitler Youth, and aspiring champion figure skater to subversive societal reject.  Torn between protecting her best friend and loyalty to the state, she makes the wrong decision.

Trying to superimpose a twenty-first century English world on a 1940s-era German society is an awkward fit.  Trying to explain how a totalitarian society could function within the world of the Internet and the ease of transcontinental travel is hard work.  Mayhew's England seems more North Korean than Nazi and certain tensions are simply ignored in favor of just telling the story.

The story itself is a bit hard to hang on, particularly the second part which attempts to simultaneously recall Jessika's last days of freedom and her survival in a concentration camp after her arrest.  This is less a fault of the writing than the story.  In a novel like this, you know that all of the characters are doomed, so you resist getting too attached to them.  Jessika's friendship for the rebellious Clementine is an obvious example of this, because you know it can only go badly.  But her illicit lesbian explorations with GG are nearly as much.  Everything else just has dread hanging over it.

Ultimately, a very depressing book.
Posted by Paul at 9:04 AM