The Nowhere Girls, by Amy Reed 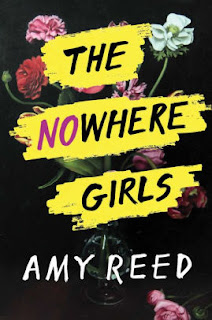 When Grace and her family move to a small town in eastern Oregon, Grace discovers that she's living in the former home of Lucy Moynihan, a girl who was driven out of town last year after accusing a group of boys of raping her.  Obsessed with the trauma that Lucy must have endured, Grace becomes determined to seek justice for her.  She is joined by Rosina, a Latina lesbian, and Erin, an autistic girl with a dark past of her own.  The girls find themselves inadvertently forming a movement, "The Nowhere Girls," and gain a critical mass of young women seeking to fight sexual violence at their school.  Along the way, they meet stiff resistance from adults and skeptical peers, and have to overcome many of their own doubts and fears.

Deeply empowering material that explores so many different important topics from the culture wars, rape culture, and slut shaming to white privilege and immigration.  I particularly appreciated the amount of attention given to the subjects of sexual agency and desire (for a book that tackles the corrosive impact of sexual violence, it was wonderful to balance it out with a sex positive message).  Reed is unapologetically didactic and it mostly works because she brings in a wide variety of viewpoints, acknowledging just how complex the material is. It's a long book and Reed covers a lot of ground here (sometimes to the point that she has to cram in a special cameo appearance here and there of an anonymous character) but it never seemed overloaded.  To the contrary, this is a real page turner and extremely hard to put down.

In sum, it is a book to read and discuss with friends. Moving, memorable, and so very important in these days of passive acceptance of sexual violence.  I hope that school boards ban it and children clamber to read it.  But for sexual violence survivors, be aware that the often explicit text could be triggering.
Posted by Paul at 11:24 AM