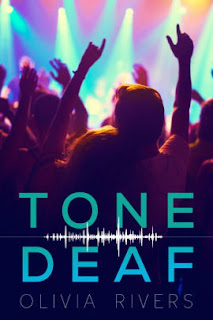 So, what better antidote for the malaise that comes from reading about Hitler Youth than a cute vapid teen pop romance?

Ali is a former child piano prodigy who became deaf at the age of ten.  Living with her abusive father, life is pretty bleak until her BFF takes her to a concert of Tone Deaf.  Ali can't stand that kind of music and hates the band.  So, ironically, she wins a lottery to meet the band. It all goes spectacularly wrong.

Jace is the lead singer of Tone Deaf, with a tragic history he holds tight to his chest.  His bad boy reputation hides that pain but when he meets Ali, they both sense a kindred spirit and walls get broken down.  Going out on a limb, Jace helps Ali run away from home and the two of them embark on a cross-country trip with Ali hiding in the band's tour bus.  Innocent romance follows.

Well, what can you say?  Fine lit this certainly is not and it suffers from one implausibility to another, but the story goes full speed ahead.  Rivers has crafted a well paced, sweet, and escapist novel that lets two nice teenagers fall in love and save their world.  No one wants to take Nazis to the beach, so take these kids instead!
Posted by Paul at 10:16 AM