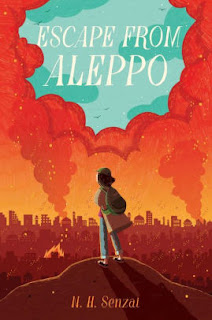 On Nadia's twelve birthday, the attention should have been all upon her and her lovely cake and her pretty dress, but instead the family was distracted by the news from Algeria, where a young vegetable seller had set himself on fire.  Three years later, the "Arab Spring" has destabilized regimes across the region and Nadia's home city of Aleppo has been destroyed by competing factions in Syria's civil war.  When continued existence in the city becomes impossible, Nadia's family packs up to flee across the border into Turkey.  However, Nadia is separated from them and is forced to make the trek on her own.

Allying herself with a mysterious old man and two boys, she slowly makes her way across the city, dodging competing factions of fighters and trying to stay alive.  And whenever the threat of imminent danger subsides, Nadia has time to grieve for the loss of her once-great homeland as she remembers what Aleppo was like before.

Senzai carves out a very ambitious task: to tell not only a horrific story of survival, but also explain -- in a way that is both accurate and appropriate for young readers -- how Syria fell into war.  In succeeding at this task, Senzai exhibits not just a strong knowledge of Syria's political history, but also of what pre-war Syrian cultural life was like.  As if that were not already enough, Senzai also addresses the emotional impact of the war on children, the struggle to preserve Syria's historical treasures, and the long simmering religious tensions that were exploited to propagate Syria's self-destruction.  In the midst of all that, there isn't much room to build characters and Escape from Aleppo is not particularly fine literature.  Nadia herself is an appealing and resourceful heroine, but the characters are largely underdeveloped.  Rather, this book is an excellent introduction for young readers, and only secondarily an entertaining work of fiction.
Posted by Paul at 4:19 PM