My Brigadista Year, by Katherine Paterson 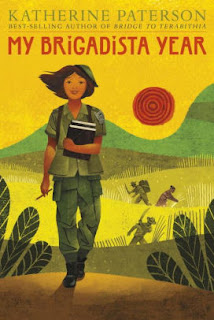 Told in the form of a fictitious diary, My Brigadista Year recalls how Lora, at the age of thirteen, participated in Cuba's experiment with promoting literacy. Joined by over 100,000 other Cuban young people, she and the others left their homes in the cities and went into the countryside to teach the rural poor how to read.  They achieved a tremendous boost to national literacy, but it came at great risk and hardship, and no small amount of danger.  For Lora (as for many of the real “brigadistas” upon which this composite was created), the year in the countryside was transformative.

Lora's character is a true believer and follower of the regime so her story is told in unstinting praise of Fidel and the Revolution.  Paterson acknowledges this and makes an effort in the book's afterword to balance the story. Still, the novel glosses over the mass murders and imprisonments that accompanied all this joy, and thus provides a very slanted view of the events.  As such, it is probably best read as fiction inspired by facts than as a historical account.  As a story, then, it can be a bit jumpy (as a diary is prone to), but is still a fascinating coming of age story with a cloistered young girl becoming a woman and realizing her ability to change the world.
Posted by Paul at 2:38 PM