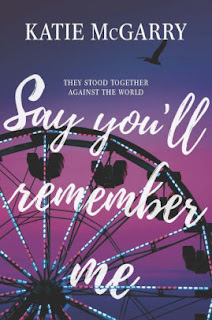 Drix, convicted of a crime he didn’t commit, is given a break when he is enrolled in the governor’s juvenile rehab program.  As a result, he has everything to thank the governor for.  When a chance encounter with the governor’s daughter Elle sparks romance, it’s a match that is obviously out of bounds.

Elle’s parents can’t allow their daughter to be seen with a convicted felon, but the greater concern is for the governor to be seen as playing favorites.  Drix concedes as he has no desire to endanger his probation by crossing his benefactor.  Elle, however, is tired of having all of her life choices dictated by her parents’ political ambitions.  Her willingness to cross her parents, mixed with their passion for each other, brings them together despite the risks.

A fairly typical teen romance that attempts to add gravitas with some nice statements about the bias of the legal system against poor people.  For the most part, these don’t really sink in, and I was struck by the author’s glossing over race.  Although it is never stated, Drix is probably black or multi-racial and Elle is almost certainly white.  The economic divide is only part of the story, and I was left wondering about the motive behind skipping over race.  But most of all, the story's focus on frivolous matters (like the puppy that both Drix and Elle fall in love with) undermines any value to the social agenda.  This is best read as simply a lightweight teen romance.
Posted by Paul at 12:25 PM