The Beauty That Remains, by Ashley Woodfolk 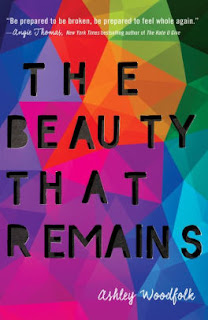 Three teens who have lost loved ones recently cope with their grief.  Autumn is unable to part with her BFF Tavia, to whom she sends IMs and emails, imagining that Tavia can write her back.  Shay suffers from being "twinless" ever since her twin sister Sasha died of leukemia.  And Logan struggles with guilt that the last thing he said to his ex-boyfriend Bram was that he hoped he "died alone"...and then he did!  Through friendships, a decent amount of navel gazing, and a shared love of music, Autumn, Shay, and Logan pick of the pieces of their broken lives.

While critically acclaimed, I simply couldn't get into this story.  The writing is decent and the characters fairly distinct and well developed, but they are not terribly interesting.  As for the story, I simply didn't find anything sufficiently novel enough about this book to justify it.  The characters grieve in various (and different ways), but Woodfolk doesn't have much new to say about teens and death.
Posted by Paul at 7:16 PM