The Dangerous Art of Blending, by Angelo Surmelis 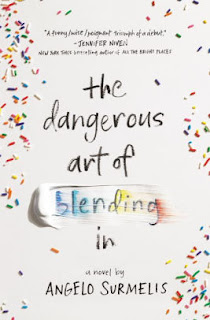 Greek-American Evan lives in a perilous state with an abusive mother and ineffectual father.  His mother is convinced that Evan is gay and that she must literally beat the "evil" out of him.  In truth, he is gay, but keeps that secret tightly closeted for fear of what would happen if his mother's fears were validated.  Trying to blend in and not be noticed, neither his sexual orientation nor the abuse he endures sees the light of day.  When his crush Henry decided to come out, however, a series of events crash through the barriers that Evan has set up that compartmentalize his life and uproot his attempts to fit in.

This brutal story strains credulity, but since it is loosely autobiographical I feel compelled to accept the author’s explanation at face value.  While decent therapy for Surmelis, I didn’t find the story itself or the characters to be all that interesting.  The evil mother is ironically the most complex character of the bunch but even she keeps hitting the same notes.  There’s not much romantic heat between Evan and Henry (or anyone else).  Overall, the story just treads water between scenes of horrific abuse.
Posted by Paul at 10:22 AM