When My Heart Joins the Thousand, by A. J. Steiger 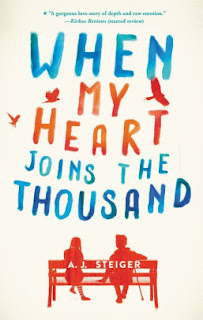 Alvie is a stone’s throw from being granted emancipation.  All she has to do is hold down her job, keep her social worker satisfied, and convince the judge that she’s capable of taking care of herself.
It ought to be simply, but she's never been good at managing her life. She's struggled with her Asperger’s for seventeen years, and has additional traumas that she keeps tightly locked behind her "Vault." Because of her difficulties in relating to humans, her best and only friend is Chance, a one-winged red hawk at the zoo where she works.

Then she meets Stanley, a boy whose bones are brittle and easily breakable.  And while even the thought of being touched by another person drives her crazy, she knows that she wants to touch him.  From that simple desire, a brazen proposal, and an awkward encounter between them, a relationship develops that is raw and honest and unlike anything you’ve ever read before.

The title, taken from Richard Adams’s Watership Down, is a reference to death, but also to rebirth.  And that is basically what this book is about:  two young people (damaged, as far as society is concerned) redeem their lives through their love for each other.  It is not smooth sailing, but then real love is messy and the novel captures that.

As my first four-star "perfect" book of 2018 (and the first one I’ve read since November), I was obviously impressed by this literary debut.  The originality of the relationship and the beautiful way in which the story was delivered is a stunning achievement for Steiger. Brilliantly written, brutally frank, and unexpectedly touching, this is a love story that will haunt you!
Posted by Paul at 11:33 AM