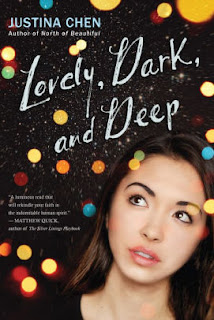 While selling baked goods to benefit girls' education outside a Firefly convention, Viola falls ill and collapses.  The culprit is the sudden onset of an allergy to sunlight.  Her new condition threatens to derail all of her plans as she finds herself herded into a protective (dark) cocoon by her professional crisis-manager parents.  The love interest (Josh) has issues of his own, not least of which is trying to complete the design and drawing of a comic book started by his twin brother, before said brother was killed in an accident.

Chen's latest novel is a story of losses and how to deal with them.  The characters are vivid, memorable, and fun -- Chen has a good sense for how to craft memorable features and idiosyncracies. Towards the end, Chen does a great job of showing how all of these diverse characters actually are similarly unable to face breaking out of their safe zones.  And while Viola has the most to lose (i.e., her life) by trying to live her life large, she seems to appreciate the most about what is to be gained.  Chen's book has moments like this when it transcends the story and makes a great Deep Point.

But the story is a bit of a mess, which has generally been my issue with Chen's writing in the past.  So many different characters and (ending summary notwithstanding) not much to really bring them together, and nothing to say in the end.  In the last fifty pages, any of the given chapters could have made just as useful of a conclusion as the one that we actually end on.  And the fact that no issues are actually resolved and the only serious character growth is Viola's little sister (a bit part at most) leaves the reader wondering what the point really was.

[I received an ARC from the publisher in exchange for an unbiased pre-publication review.  The book is scheduled to be released on July 31st]
Posted by Paul at 1:51 PM