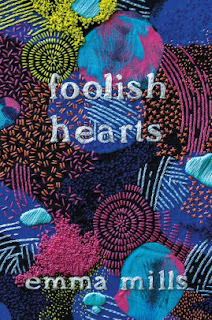 Claudia and her friends have a dramatic senior year of friendships growing and dying.  Mills' novel shies away from a particular specific story towards simply following her characters around.  There's a school play, an older sister's pregnancy, a lot of parties, and a rock concert.  But the story is simply about the ebb and flow of friendships, whether they are of the BFF type (like Claudia and Zoe or Noah and Gideon), between siblings (Claudia and her older siblings, Gideon and his younger sister), or romantic (Claudia and Gideon, Iris and Paige).  There's not really a message or even a central purpose.  Instead, the book just illustrates life and its networks.

If that is your sort of thing, Mills is a decent writer and has some creative outlets for it within her book, ranging from boy band worship to online gaming.   But I found the lack of a story and dramatic arc to be rather dull and the huge number of characters dizzying.  They kids were generally distinctive but with not much dramatic purpose to the interactions, it just seemed that I was being pulled one way and then another -- realistic, perhaps, but not terribly meaningful.
Posted by Paul at 3:30 PM