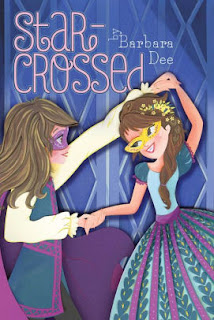 Mattie's had a crush on Elijah for years, but now that she's in eighth grade, she isn't so sure she likes him anymore.  More surprisingly, she finds that she may like Gemma instead.  Does that mean she likes girls instead of boys?  Mattie isn't sure.  And moreover, she worries about how her classmates and her friends will treat her if they find out.

All of this gets complicated when Gemma is cast as Juliet in a school production of Romeo and Juliet.  During rehearsals, Romeo drops out of the play, and Mattie finds herself cast in the role as Romeo.  In a story that makes clever use of Shakespeare's tragedy, Dee spins an insightful and gentle age-appropriate exploration of sexual identity.

It's the type of book which will raise the hackles of conservative parents, but it's really quite chaste.  Dee's treatment very gently explores the sexuality question, speaking mostly about the difference between friendship and being more than friends. As it turns out, middle school romance between girls is every bit as awkward as between girls and boys.  Homosexuality is accepted pretty much at face value in this book, which may feel unrealistic to some readers, but it is also largely beside the point:  these kids are not having sex (they are barely at kissing!).

I found this to be a truly remarkable book.  It doesn't preach or make a big deal about its message.  It's really just a beautiful story of children exploring relationships, be they romantic or just friends.  The only difference between it and other well-written middle reader romances is the fact that Mattie and Gemma are both girls.
Posted by Paul at 11:47 AM