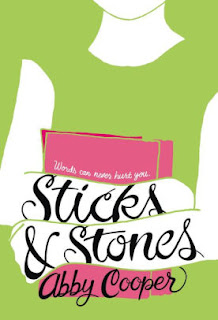 Elyse has an extremely rare condition:  when people call her names, the words appear on her skin like tattoos and stay there for a few days, fading away slowly and being replaced by new words.  She’s had the condition since birth but when she was young, the words were mostly nice ones.  Now in sixth grade, the words that appear on her skin are more likely to be nasty.  And the symptoms have grown more severe:  now she can make words appear by thinking them on her own.

With the help of anonymous notes from someone at school, she discovers that she can control the way her body responds to the words, by developing self-confidence and telling herself that she has many positive traits to counter the nasty words.  The opportunity to run for class office, while frightening at first, provides her a chance to prove that the words that describe her are overwhelmingly positive.

The story is not subtle, but Cooper’s self-positive message is great for middle readers.  Elyse’s struggles and eventual triumph, in the face of doubts from even her own family, are inspirational.  And the story isn't only about self-actualization.  Along the way, Elyse also has some adventures sorting out friendship issues and even explores the scary world of middle school romance.  The overall message that we need to wear the words that people use about us with pride (instead of fear) is positive and affirming.
Posted by Paul at 10:07 AM