The Agony of Bun O'Keefe, by Heather Smith 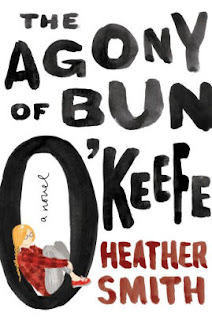 For years, Bun has watched the steady decline of her emotionally unstable mother as the woman starved herself and Bun, and filled their home with junk.  Finally, in a fit of pique, she tosses Bun out on to the streets.  Bun, suffering from some sort of social condition (it's never quite clear if she's on the spectrum or a victim of emotional neglect or both), would have struggled to survive, but for a chance encounter.  Taken in by a ragtag group of drifters, she is sheltered and fed.  And, while the situation is dangerous, the group helps Bun reconnect with humanity, providing a surrogate family and helping her relearn what love is.

In sum, a fairly dreary novel about an at-risk child and a group of well-meaning but not altogether reliable friends.  There's not really any deep message or meaning here and the characters, while colorful, were not all that sympathetic. The book had originality but the story never grabbed me and the threatening situations (including a scene in which Bun gets molested) were often quite disturbing.
Posted by Paul at 10:11 AM