The Darkest Corners, by Kara Thomas 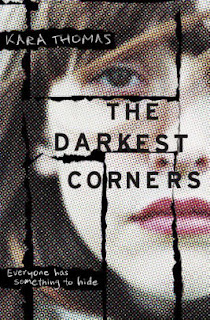 When they were children, Callie and Tessa were the key witnesses in a trial that put away the alleged mass murderer of a string of prostitutes in their area in rural Pennsylvania.  After the trial, Tessa's family life fell apart and she was sent to live with her grandmother in Florida.  On the occasion of her father's death, she returns to her old town.  When she arrives, she learns that she has just missed her mother and older sister (neither of whom she has seen since she was sent away).  Trying to track them down, she starts to make a series of shocking discoveries.

Coincidentally, a judge has recently granted a hearing to the convicted man to present new evidence.  The idea that the man they helped put away may get released terrifies both girls.  While Callie remains convinced that they did the right thing, Tessa has grown to doubt the accuracy of her own testimony in the intervening years. Moreover, Tessa's search for her family keeps crossing paths with the convicted man and those murders from long ago. And when a new murder occurs that bears a striking resemblance to the others, it really does seem that Tessa and Callie helped to convict the wrong man.  And worse, that Tessa's family is messed up in the whole thing.

A brisk crime thriller with lots of twists and turns.  Unfortunately, by the end, the story has grown so convoluted that Thomas has to cram the resolution into a brisk recount.  That's a frustrating way to end a tale which is so well-paced up to the last thirty pages. With such a busy story, there isn't much time to do thorough character development, but Thomas excels at color and depicting an environment and characters who are just threatening enough to keep the tension going.  While Thomas keeps us a bit off-balance about where exactly the story takes place, you can feel the rural northern PA vibe to the story vividly.
Posted by Paul at 12:11 PM