What Girls Are Made Of, by Elana K. Arnold 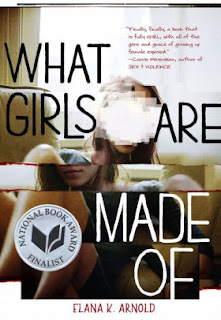 Nina defines herself through her boyfriend and their relationship.  When he ditches her, she has to figure out who she is.  The process is fraught with a number of detours, ranging from comparing her life to an unwanted animal in the shelter where she works to recalling the grim fate of early Christian martyrs.  Written non-linearly, Arnold’s novel becomes a series of short essays on femininity, sexual politics, virginity, art history, and the role of love in a conditional world.

It’s an angry polemical book (more than a novel) and angry in a way that is largely deserved.  Arnold makes a number of good points.  It’s also a painful book as it calls out practices ranging from animal endangerment to rape.  But at times it can seem simply angry.  Arnold doesn’t allow space to explore unconditional love (having her character reject it out of hand) or even kindness.  Everything is about people treating each other badly (usually men to passive women).  Like reading an Andrea Dworkin book, it is too easy to fall into despair and paralysis from all this anger, rather than grow (although Arnold's style reminds me more of Susan Griffin and other eco-feminists).  Still, it’s beautifully written.  The short essay format allows Arnold to achieve maximum impact with her messages.
Posted by Paul at 9:39 AM