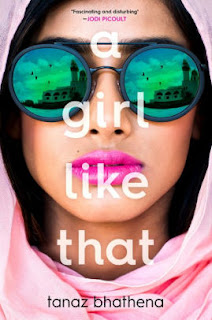 Zarin Wadia is the type of girl that adults warn other girls to avoid:  a bad example, always seen hanging out with boys, smoking cigarettes, and disobeying authority.  But living in Jeddah as a foreigner (half-Parsi) with an alien religion (Zoroastrian), Zarin knows that having some additional notoriety could hardly make much of a difference.  And while being a rebel is an unimaginable risk in such a conservative country, Zarin feels drawn to risky behavior anyway.  There is a thrill involved in clandestine trips to the Corniche with boys that helps to satisfy her need to live a real life.  With a boy named Porus (fully Parsi, but also an outsider) who ironically is not her lover, she shares those dreams and hopes.

And then there is Mishal, who while more obedient to her elders, lives a secret life collecting gossip for her blog and living vicariously through that gossip and through watching her rather more libertine brother Abdullah and his friends.  Unlike Zarin, she accepts that a girl cannot live like a boy, but her acceptance does little to improve the eventual outcome.

In case anyone was under the impression that being female (let alone a teenage girl) in Saudi Arabia was easy, this scathing portrayal of the hypocrisy of Saudi society and mores will open some eyes.  For those of us already familiar with the misogyny of the culture, this novel is a somewhat tedious reinforcement of our biases.  Still, Bathena’s portrayal transcends all of that through its detail and through its sympathy for its characters.  While the environment is probably unfathomable to a North American teen, there is a universal humanity that young readers will recognize.  And in this portrayal, an attempt to show how survival is possible, even if the costs will seem extreme.  This is not the Saudi-bashing novel it deserves to be (Bhathena is much more subtle and maybe even kind).

Zarin herself is probably the most fascinating of the bunch as she doesn’t neatly fall into the carefree rebel mold into which we might like to place her.  She pays a terrible price for her actions and she feels remorse and questions herself frequently through the story.  Yet her bravery comes from a desire to live and break free of expectations – in a way that is instantly recognizable, yet fraught with unfamiliar risks.  More problematic is the story itself which opens with the death of Zarin and Porus in a car crash -- the sort of story twist from which there is no recovery.  Stranger, the death is largely inconsequential to the story and serves more as a distraction in the end.  It is Zarin's life that we really care about.  Fascinating and chilling at the same time.
Posted by Paul at 2:15 PM