And She Was, by Jessica Verdi 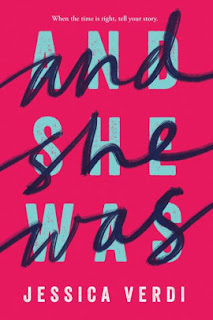 When Dara has to find her birth certificate in order to apply for a passport, she is surprised to find her birth mother’s name doesn’t match her Mom’s.  Assuming from this that she was adopted, the truth turns out to be a much bigger shocker:  her Mom is actually her biological father.

Shocked by the discovery and the realization that she has been deceived for her entire life, she flees home.  She follows some clues to track down her biological mother’s family and reconnects with them.  While she refuses to talk with her Mom, she agrees to read a series of emails along the way, in which her Mom explaining her life and how all of this happened.

While strained to the edges of credulity (could a non-CIS female hide the fact from her daughter for 18 years?), the whole thing becomes a vehicle to describe a composite trans life.  This mostly works, although at times, Verdi tries to cram in too much.  But if you are going to try to explain the struggle that a non-gender conforming person goes through and make it palatable to a broad audience, there is a lot to tell.

The remainder of the story is hit or miss.  An obligatory romance to accompany the road buddy story between Dara and her BFF Sam is a throwaway, Dara's aspiration to become a professional tennis player, while seemingly unrelated, is nicely tied in.
Posted by Paul at 11:06 AM