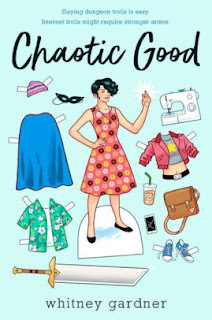 Cameron loves to sew cosplay costumes.  She’s good enough to win contests, but when the fans find out that she isn’t one of them, there’s a backlash.  She finds her blog inundated by trolls attacking her.  And trying to defend herself just aggravates the situation.

As if that wasn’t bad enough, there’s her family’s recent move from Portland to Eugene. Cameron’s having a hard time adjusting to small-town life.  There's only comic book shop in town, and its manager is a misogynistic troglodyte, who Cameron has to navigate through to get the inspirations for her creations.  He's convinced that girls can't be real gamers and lack true geek cred.

Motivated by a desire to avoid the abuse, Cameron gets an idea to do the ultimate costume:  dressing up as a guy and proving to the manager (and the online jerks) that she can pass as a geek. Her subterfuge works so well that she gets herself invited to join a local D & D game.  But then she falls for the DM and things get complicated.

It’s a pretty silly premise for a romance, but not actually that silly of a book.  Featuring some original graphic novel pages depicting the D & D campaign, it’s more a love letter to gamer geeks and a plea for grrl empowerment.  While I think Gardner gets the sexism of the culture right, her understanding of the misogyny is quaint and silly enough that even the characters who supposedly subscribe to it sound indefensible to themselves (I don’t think she had the heart to really depict the misogyny that exists in gamer culture).

Of the characters, Cameron and Lincoln’s grandmother are particularly notable, but all of the kids stand out in their own way (with the possible exception of Brody the manager).  Gardner also does a fair job of describing in some detail two separate cultures:  gaming and sewing.  It's pretty obvious that Gardner has much more fun with sewing than gaming, although she does capture enough detail to show she did her research (even if -- like Cameron -- she isn’t a fan).  The ending is a bit too neat and trite (“Oh! We didn’t know all the stuff you were going through!  Oh!  How can we make it up to you?”) but the trip there is enjoyable enough.
Posted by Paul at 11:07 AM