Holding Up the Universe, by Jennifer Niven 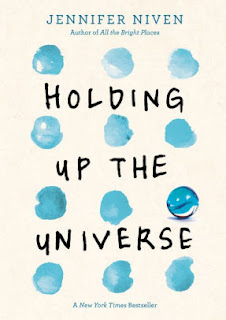 Every once in a while, a novel is placed in a town or place that I know well, but rarely does it cross paths with where I currently am, so it was something of a surprise when the protagonists of Niven’s innovative new romance ended up in Richmond, Indiana!

After years of homeschooling and hiding from her peers on account of some unwanted notoriety, Libby is returning to mainstream schooling.  Her high profile comes from being identified as “America’s Fattest Teen” when she was rescued from her own house – a process that involved cutting through the walls to widen the doorway enough for her to be evacuated.

Jack's issues are more congenital.  He can’t recognize faces, suffering from a neurological disorder called prosopagnosia or “face blindness.” His greatest concern is not his condition per se, but what he believes would happen if it became public knowledge.  He fears the ridicule of his peers, so instead he's learned to hide the condition behind swagger and brashness.

When a prank gone awry ends Libby and Jack in detention together, they discover a bond that brings them together.  To their mutual surprise, they find themselves confessing their deepest secrets to each other.   An unlikely romance develops, which leads in turn to each of them taking steps to overcome their fears.

While largely predictable, this novel stands out for at least two reasons:  the unusual conditions and challenges of its protagonists and the greater message about kindness and standing up to peer pressure.  There are so many ways Niven could have gone for easy sappiness, but the ending here is complicated and just as fulfilling.  And the story is full of vivid and powerful scenes like Libby standing in her bikini in front of her peers or Jack getting in trouble for confusing his younger brother with another boy.  And even tired old tropes like the requisite drunken teen party scene were treated in surprisingly original ways that gave them a bit more life.

Libby and Jack's trip to Richmond takes them to Clara's Pizza King which turns out to be a real restaurant and pretty much as described in the book.  With this story fresh in my had, I decided to check it out and found it fun, quirky, and memorable -- so special thanks to Niven for the dining suggestion!
Posted by Paul at 10:49 AM