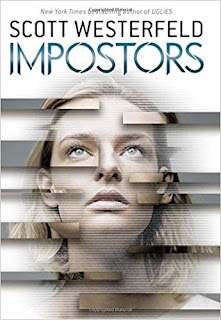 In the introductory novel of a new series set in the world Westerfeld created for Uglies, Shreve is the most powerful empire in the world now.  And the heir to the throne, Rafi is protected by a unique bodyguard -- her twin sister Frey.  While Rafi is seen often in public, a figure of grace and beauty, Frey hides in the shadows, strictly and brutally trained in martial arts, and used as a body double.

When their father decides to conquer the people of Victoria, he sends Frey as a decoy, using her to convince the Victorians that he won't hurt them.  But since Frey isn't his "real" daughter, he thinks nothing of betraying them all.  What he doesn't count on is Frey's willingness to fight back.  While the Victorian city is destroyed, Frey and Col (the prince of Victoria) escape and plot revenge and rebellion.  And, while there is plenty of fast-paced action to keep the story going, there is also time for Frey and Col to fall in love.

There's plenty of room at the end for subsequent installments and Westerfeld promises three more books after this.  Being familiar with Uglies will obviously get more out of this novel, but it isn't necessary (and in fact I haven't read the predecessor). While very much by-the-numbers YA dystopian, Westerfeld's crisp writing and brisk pace keep this familiar story humming along with excitement.  There is not much character development here (Frey's hurt at being used by her family is dragged out repeatedly and there's some exploration of the difficulty that Frey has developing a personality of her own) but the focus is on the action.

The story is certainly not very subtle.  The neglected younger sibling coming to rescue her older twin will resonate with the target age group.  As one of the characters actually points out, it's also rather trite that the is a basically a revolution based around a teenage daughter trying to take out her Dad.  And despite the constant threat of violence and danger, the fact that the two young people find some awkward romance time (and Frey gets to wear a pretty dress or two and put on makeup) is Westerfeld's attempt to keep the priorities straight here.  But snarkiness aside, this is a story I couldn't put down, so I certainly was sucked in.


[Disclosure:  I received an ARC from the publisher in exchange for an unbiased review.  The book is scheduled for release on September 11, 2018.]
Posted by Paul at 4:46 PM