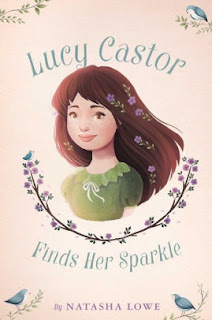 Lucy wishes everything would stay the same.  But as fourth grade begins, her best friend Ella has decided she no longer wants to play their old games.  The mean lady next door has erected a fence that blocks out the sunlight in their backyard.  Worst of all, Lucy's mother has announced that she's going to have a baby!  There are some changes that you can't control, Lucy learns, and you just have to learn to make the best of them.

Not a lot of new ground broken here. The by-the-numbers middle grade focus on changing friends and changing families are well-trod ground.

The story is sweet and trauma free and if I have a complaint about the story it is that the lack of drama means that it isn't terribly interesting.  The ex-best friend is actually pretty nice and a few kids who say mean things apologize for doing so almost immediately.  The crabby next-door neighbor is about as nasty as we get here and she isn't much of a threat.  Everyone is terribly nice.

Humor might have helped, but that is lacking as well.  Lucy is a bit of a trouble maker, but not in the fun way that Clementine (to pick a similarly-targeted heroine) would be and there is not much in the way of consequences for her bad choices.  All of which feeds in to Lowe's focus on keeping the drama minimized.
Posted by Paul at 5:12 PM