Fat Girl On A Plane, by Kelly Devos 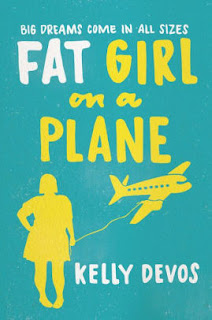 The eye-catching title alludes to the protagonist's struggle with inconsistent airline policies during a cross-country trip, and the humiliation of being informed that you are "too fat to fly." This takes place at the beginning of the novel, but the story actually has little to do with air travel.  Told through parallel story lines, we learn how Cookie Vonn's life changed (or failed to change) as the result of a crash diet.

Cookie loves fashion and is a skilled clothing designer.  There is little room in the industry for a 300+ lb woman and even less for her idea that plus-sized women deserve to be able to wear haute culture.  She's determined to prove them wrong.  As a fierce fashion blogger, she jockeys herself into a meeting with fashion icon Gareth Miller which grows into a professional relationship and more.  Soon, she is on top of the fashion world, putting out a collection of plus-sized fashion under Gareth's label, embroiled in a hot romance with Gareth, and about to realize her dream of attending the Parsons School.  Almost everything seems possible, especially compared to the struggles she had a two years ago as an overweight teen.

But life is not so simple.  She is just as estranged from her parents as she was as a child.  Her nemesis Kennes is still trying to steal away her success.  And she's never managed to reconcile with the loss of her BFF (and crush) Tommy at the end of high school.  It would seem that losing nearly 200 lbs doesn't really solve anything.  Instead, Cookie finds that she must address underlying issues of anger, learning to let go of emotional hurt and perceived injustices, if she is ever going to be truly happy.

It's a busy book, full of themes ranging from nepotism to neglect, from fashion to life as a full-sized woman.  Being an NA (and a Harlequin Teen) book, there's the requisite romance and pursuing career ambitions, and even some humor (Cookie's description of the ill-fated eponymous plane trip is as hilarious as it is aggravating).  But with so much going on, Devos never gets too reflective and keeps the pace of the book quite brisk.  That leaves lots of room for the reader to draw their own conclusions, but it leaves the story shallow.  This is no where more clear than the ending plot twist that comes out of nowhere and sideswipes the conflict that has been building up.  The postscript tirade against the fashion industry is lovely, but comes out of nowhere as there is no build-up for it.  In sum, the book is enjoyable and a quick read, but really is all over the place in terms of the ideas it wants to convey.
Posted by Paul at 7:09 AM