Once Upon a Princess, by Christine Marciniak 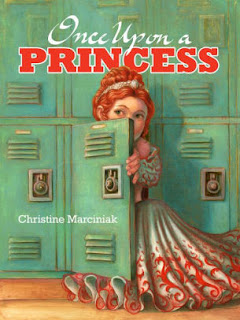 The story opens like a fairy tale as twelve year-old Princess Fredericka ("Fritzi") is attending her first ball to honor 800 years of her family's rule over the alpine city-state of Colsteinburg.  But before the night is through, she and her family are forced to flee for their lives as a faction of constitutionalists seek to overthrow the monarchy. They go secretly into exile to the US and settle in a quiet Boston suburb.  Fritzi finds herself enrolled at the local middle school, trying to adjust to life no longer as a princess.  Suffering through a few middle school indignities, she also plots to fight for her family by posting calls to arms through social media.

What I had expected to be a comedy (a la Princess Diaries, but in reverse) turns out to be a rather depressing story about a girl watching her family and her legacy coming undone.  In that light, Fritzi's attempts to save her kingdom come off as more desperation than fun.  And the usual troubles making new friends, dealing with teachers, and battling with the local Queen Bee get largely lost in the serious stuff.  And when the ending turns violent and Fritzi finds herself in mortal danger, the author has basically painted herself into a corner.  It all seemed too much!  So, not really funny or sweet enough to be the story I hoped for, and certainly not heavyweight enough to be anything else.
Posted by Paul at 1:31 PM