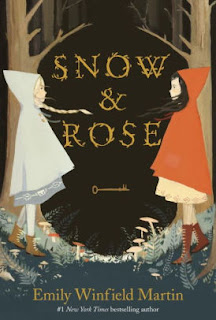 An adaptation of the classic (albeit frequently mis-told) fairy tale of two sisters -- blond/white Snow and black/red Rose.  After their father disappears during a trip through the woods, they and their mother are thrown out of their home and forced to take up occupying an abandoned house in those same woods.  Their mother warns them to stay close, but the girls long to find their father and they wander.  In the woods, they find many strange and scary things:  wolves, a hunter, a tiny little man who speaks in riddles, a injured bear, and an old woman who maintains a ”library” of objects which tell stories.

Illustrated with original watercolor sketches, this handsome fairy tale is a striking book.  The story, not always so straightforward, gels well enough in the end, although is not as strong as the presentation.  Rather striking for the genre, the narrative is surprisingly animal-friendly, whether it is showing kindness to a hungry bear or to the girls’ cat.  The more gruesome nature typically associated with fairy tales is largely absent.
Posted by Paul at 10:59 AM