Summer of Salt, by Katrina Leno 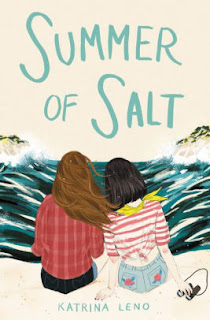 Every woman in Georgina’s family has had some sort of magical attribute (her sister floats).  And while the other residents of By-The-Sea (their island off the coast of New England) are vaguely aware of the family’s talents, no one talks about it.  Just as well, as Georgina’s own particular talent hasn’t yet revealed itself.

The women run an inn and take care of the “bird heads” who come every summer to watch a rare bird whom everyone calls “Annabelle.” But this year, Annabelle doesn’t make her annual appearance and the island grows concerned that the bird may be gone for good.  Then, Annabelle is found dead and mutilated and  Georgina’s sister is strangely silent and avoidant about the whole matter.  Suspicions spread that her entire family is somehow complicit. The truth is much more complex.

A bit hard to follow at point, the book exalts in its depiction of a quiet island life.  There is a flirtation with a romance between Georgina and one of the tourists and a late introduction of sexual violence into the story (which is subsequently rushed along).  But none of these themes seem very consequential to the tale.  Instead, the book seems mostly to be about life on the island (and to a lesser extent the process of gaining the courage to leave it).  It’s that generally languorous pace that makes this a hard book to really get into.
Posted by Paul at 11:18 AM