The Handsome Girl & Her Beautiful Boy, by B. T. Gottfred 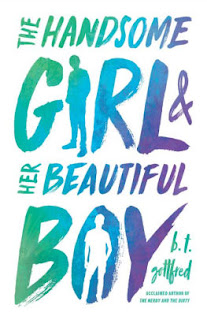 Everyone assumes that Art is gay and Zee is a lesbian, so when they meet and start hanging out, no one (least of all them) think the sparks of romance are going to fly.  But they do and the world will never be quite the same.

Zee has had a crush on her best friend Cam for years, but he's only had eyes for Abigail.  Since he's assumed that Zee doesn't do guys, it has never occurred to Cam to notice how Zee longs for him.  But when Abigail's younger brother Art meets her, he knows in an instant that she crushing for his sister's boyfriend.  But most of all, he knows that Zee is the love of his life.  And now he has to convince Zee that she must love him as much as he loves her.

Thus launches a love story that grows stranger and more complex with each passing page.  There's no denying that Zee acts more masculine than Art and that she does find feminine traits far attractive and sexually appealing.  Art, meanwhile is drawn to Zee's tough masculine behavior in a way that even other boys don't do for him.  Can you be a guy who likes girls who act like guys?  Well, yes, certainly if you're with a girl who likes guys who act like girls!  As Zee describes their first sexual encounter, "My first orgasm with a boy happened when the boy cried out like a girl."

I found the actual characters a bit obnoxious and self-obsessed (Art, in particular, with his eternal optimism and over confidence is a bit of a pill), but for a novel which is about rethinking how we think about ourselves, that is pretty natural.  Intellectually interesting, but maybe not something I want to endure 400 pages of!  Still, I think Gottfred has created a truly gender fluid love story and that makes it something of a landmark.
Posted by Paul at 8:07 PM