All That I Can Fix, by Crystal Chan 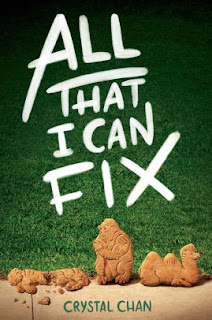 When Makersville IN experiences a crazy wind storm, squirrels are falling out of the trees.  But the craziest thing is the old guy who lets his exotic animals go free and then promptly shoots himself dead.  For Ronney, it’s all reminiscent of when his father tried to off himself, missed his head, and shot his shoulder instead.  With Dad now stuck in a depressive funk and Mom doped up on prescription pills, it falls on Ronney to take care of his family and his little sister Mina.  And along the way, he’s picked up the attention of a very focused young boy named Sam who is convinced that Ronney should help him find his older brother, who has run away from home.

Wild animals are on the loose and they are hungry.  When these lions and tigers and hyenas and pythons (some fifty-odd animals in all) start mauling the locals, the locals pull out their guns.  Soon, outsiders are coming in to join the fun and hunt down the escaped animals, which in turn brings in the anti-gun people and the animal rights folks.  And when the hunters can’t find animals to shoot, they start shooting each other.

Now, if Ronney could just get his Dad to come out of his shell and take care of things.  Their house is falling apart and Ronney keeps skipping school to conduct home repairs.  Taking care of Mina is also burdening him.  Thanks to his Dad’s failed suicide attempt, Mina is terrified of gunshots, which in gun-happy Makersville IN right now are pretty much the only thing you can be certain of.

The critics call the story “life-affirming,” which probably isn’t true if you’re a squirrel or a tiger or a lion or a python.  And probably not true if you’re one of the humans in this high-body-count story that never quite takes itself seriously.  Given the violence and how flippantly it is recounted, I really couldn’t take it seriously myself.  For me, there are other problems.  Ronney’s rants against his father are understandable at first but just grow annoying and repetitive.  Thankfully, Ronney gets his comeuppance in the end, but I was really aching for it to come long before I got satisfaction.  Similar repetition plagues Ronney’s relationships with his best friends (Jello and George) and with the kid Sam.  In general, whatever the theme, Chan doesn’t seem to know what to do with it except repeat it again and again.  This only breaks suddenly at the end of the book and resolution comes – in many ways – out of nowhere.  The ending is satisfying but hardly satisfactory in a novel that really doesn’t seem to know what it wants to say and certainly doesn’t know how to say it.
Posted by Paul at 10:52 AM