How We Roll, by Natasha Friend 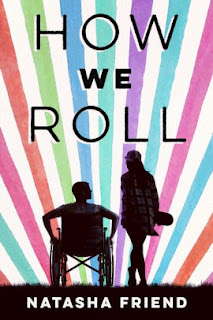 The good thing about having to move across the country from Colorado to Massachusetts is being able to start again.  Quinn can’t do much about the alopecia which has caused her to lose all of her hair, but with a good quality wig, she may be able to hide the condition from the kids at her new school.  But new schools don’t necessarily give you a chance to start again and with a little brother with autism, Quinn is still going to have a rough time fitting in.

Still, it's not the issues that you expect that challenge you.  The girls at her new school turn out to be surprisingly nice even when her secrets are inevitably revealed.  Harder is her developing relationship with Nick.  Nick, whose promising football career was cut short in an accident that led to the amputation of both of his legs, proves more challenging.  At first, she finds him to be someone who understands her anger and frustration at being defined (and found lacking) through physical conditions she cannot control, but the relationship grows complex.

A very busy story (one wonders if we really needed all of the health and developmental issues in a single story) but they do all gel together in the common theme of making the best of physical challenges and continuing to “roll” with them.  The characters were mostly charming and it was great to see some nice kids interacting (including especially nice girls), when so much children'sliterature focuses on bullying.

I could have done without Friend’s half-hearted effort to give the locals an Eastern Mass accent (which she does mostly be changing “-er” to “-ah” and tossing in a few random “wickeds”).  It didn’t really add much, was inconsistently applied, and ultimately just became distracting.  Another issue is the targeting of the story.  The subject matter seemed more pitched at middle readers, but some of the sexual scenes might be more appropriate for older readers – perhaps a later tween or early teen?  I'll class it as YA, but I think the subject matter may seem babyish.
Posted by Paul at 10:41 AM