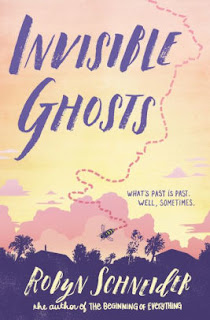 Rose doesn't need to grieve over the death, at age 15, of her older brother Logan because she's been able to interact with his ghost for the past several years.  They watch old TV shows together (Buffy, Star Trek, Dr Who, etc.).  In doing so, she's allowed other social outlets to wane.  Obviously, explaining this to anyone is out of the question:  if she told them that she was hanging out with her brother's ghost, they would think she was crazy!  As far as she knows, she's the only one who knows he's there.

That comfortable status quo though is thrown off with the return to town of her former neighbor Jamie.  They were close as children and in the intervening years, he's grown into a very handsome boy.  But what really draws them together is the realization that he can see Logan as well!

While it comforts Rose that she's not crazy, Jamie's appearance threatens the relationship between Rose and her brother.  Falling in love, Rose spends more time with Jamie and less time with Logan.  Jealous and increasingly worried that Rose no longer needs him as much as he needs her, Logan becomes possessive and violent.

A quirky ghost story, or as one character puts it, "a love story with a ghost," but the story meanders.  There are some clever parts (like having a school production of Dracula), but so many ideas are not fully developed, be it Rose's affinity for costuming or Rose's growing independence (first from her passive social life and then finally from her brother), Jamie's ability to communicate with ghosts, and even Logan's growing instability. Throughout, Schneider struggles to develop and complete her ideas.  So, while there are many lovely parts to the book (and a very satisfying conclusion), the overall story is a frustrating string of incomplete thoughts.
Posted by Paul at 10:30 AM